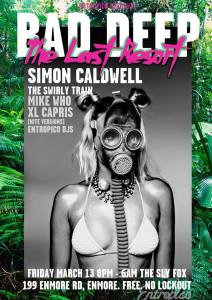 Sorry you missed me! Past Gigs…

This is one of my absolute favourite Marrickville arts nights. They’ve had everything from sea shanties to yodellers. Its always surprising and stimulating with large, warm audiences and lots of cozy couches. I’ll be alongside some fantastic acts, the very interesting experiemental technological artist Pia Van Geldler, and a choir singing Renaissance choral music.

If you will be doofing at Subsonic Festival this year, come and say hello to Geronimo and I in the Village space. We might be dancing on podiums bedecked in gold or performing some cheeky burlesque in the dark night. There will be snakes, sacred geometry and lots of gold.

We’re also contributing to the fabulous recycled decor by the good folks at Milkcrate Events.

I’ll be debuting a new show in Sydney’s first ever puppetry slam!

With Umbrella Theatre we’ll bring you some seriously paranoid puppets.

Keep an eye on the main stage for me as your burlesque entertainment and MC!

We will be supporting the incredible Slovenian pupeteer and musician! A rare treat!

Extinction night at Jurassic Lounge and Umbrella Theatre will bring you our classic choose your own adventure tale – Save Me.

We also have an exciting residency lined up for November-December but its all hush hush for now! More details coming soon!

One night’s brainchild, the LaToosh gang will be conducting a relaxing session of bogan yogan in the morning to kick off the festivities at Newtown Festival. 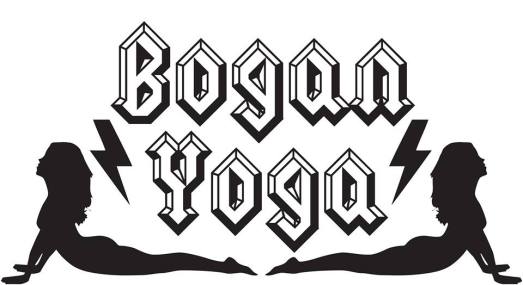 First up, our favourite puppets, Old Mate, Dobby and a few other culprits will appear in a multimedia installation by Tolmie Rogue Simian as part of the Night Garden. The Night Garden is always a real treat with dozens of talented light, sound and visual installation artists creating a street party playground along Hutchinson Street from Tortuga to Index Gallery.

A new experimental performance night, On The Edge, will launch this Sunday at a new Inner West studio space dedicated to radical thinking and experimentation. There’ll be a diverse range of experiences and performances, plus a puppet or two, of course!

I’ll be hosting the Emerald City variety night for the Sydney Fringe Festival. The Seymour Centre forecourt looks simply lovely draped with green crystals and fairy lights hanging from the trees. If you’re feeling a little overwhelmed by the program, come along from 6pm and you can sample a range of fringe festivally goodness.

Word Travels Festival will bring you three days of live literary mayhem. Australia’s first spoken word festival, there will be workshops, panels, spoken word walking tours, a poetry bordello and of course the Australian Poetry Slam. I’ll be buzzing about behind the scenes helping to make it all happen!

Umbrella Theatre present ‘Jurassic Therapy’ at Jurassic Lounge. Always guaranteed to be live, interactive fun, we have a range of therapies to help you with your troubles. Expect prehistoric prescriptions, massages and laugh workshops.

Teaming up with Such & Such & Gypsy La La Land, we’ll be bringing you a night of classic burlesque with sardonic commentary from our fabulous puppet host, Ms Peggy Taylor

Umbrella brings you ‘Save Me’, a choose your own adventure puppet tragedy.

Subsonic Festival
Geronimo and I will appear in a burlesque/dj/vj collaboration – a mash up of messed up rabbit visuals, samples and dancing
Riverwood Downs Mountain Valley Resort, Hunter Region

I’ll be performing in a freaky puppet show about death, and choices

Caravan Slam at Art & About Sydney

I’ll be performing a stupendous piece of Dadaist Poetry

I’ll be jelly wrestling – Thunderkat vs the Disco Diva

I’ll be doing a burlesque routine for this show only! 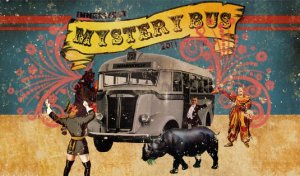 “Save Me” with Umbrella Theatre Company

At The Vanishing Point Gallery Newtown

Thunderkat is the tail of a giant rabbit!

Error: Twitter did not respond. Please wait a few minutes and refresh this page.